I eventually settled with the Psyker for my Inq28 warband for the Chapel on being an Astropath. 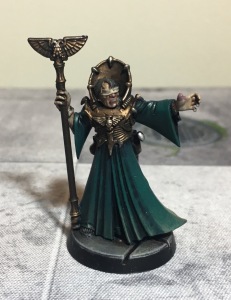 I have a very vague recollection of a green robed Astropath artwork from the original Warhammer 40k Rogue Trader game book (or perhaps it was the old wacky 40k expansion for Talisman), but I haven’t been able to find any copies of it online as a reference. Most of the more recent official colour schemes are a dark green so I decide to stick with that as a base colour for the robes and then a copper metallic chest-plate and staff which ties back to the power armour colour of my Inquisitor Kallidon Fell. As I think I might have mentioned previously in my blog, I am really a quick and dirty army painting by numbers guy at heart – I’m pretty happy churning through when I have a simple scheme for an army down, but I do struggle trying to do something a bit more nuanced like individual characters. I think with Fell’s warband going forward, I’ll try to make sure that they all share the copper metallic as a spot colour to very slightly tie them together, but I won’t worry too much about it if they don’t look too cohesive as a group as they are supposed to be a collection of loosely aligned individuals rather than an army.

Atellus is proto-typical for an Astropath: blinded from the sanctioning/soul-binding with the Emperor and prematurely aged due to the ravages and strains of utilising his powers. I decided to keep the slightly damaged hand and just discolour it slightly to indicate an old wound or perhaps withering due to sanctioning or a very slight hint at warp taint. If it nags at me too much then I might come back to him, clip the hand off and glue a new one on.

This entry was posted in Horus Heresy 30k, Inq28, The Chapel and tagged Astropath, Inq28, Psyker, The Chapel. Bookmark the permalink.

This site uses Akismet to reduce spam. Learn how your comment data is processed.