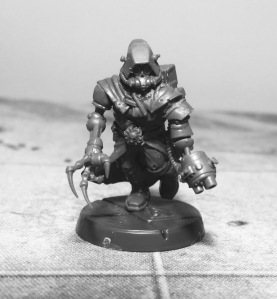 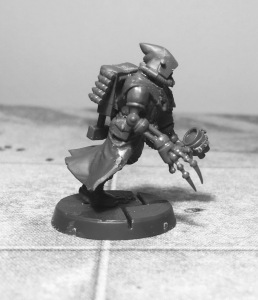 My pieces for The Chapel project have all been fairly militarised looking to date and so I wanted to do something which looked a bit more civilian in flavour – more NPC rather than PC to steal a phrase from roleplaying games.

The Rogue Cartographer is a member of the Stygian Cartographers that has become lost in the labyrinthine region of the Under Chapel known as the Orphic Catacombs – where even his prized archeotech auspex has failed.  Friendless and weaponless he wanders alone, cut off from the reassuring vox net contact of his fellow Stygian Cartographers – his mind and programming slowly corrupting from the sustained exposure to the Chapel’s horrors.  Perhaps an altruistic warband exploring the Chapel will encounter the Rogue Cartographer and help him to escape – an unlikely prospect given that those that seek The Chapel’s treasures are rarely more benevolent than its predatory inhabitants.  However, the Rogue has seen much of the Orphic Catacombs’ secrets and so may have valuable information to barter with.

This entry was posted in Inq28, The Chapel and tagged Inq28, Ostium Guides, Stygian Cartographers, The Chapel. Bookmark the permalink.

9 Responses to The Chapel Project – Part 4 – The Rogue Cartographer

This site uses Akismet to reduce spam. Learn how your comment data is processed.